home archives extras ebooks
CHARACTERS TO LOOK OUT FOR
images for descriptions! 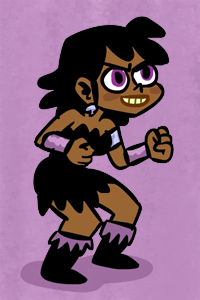 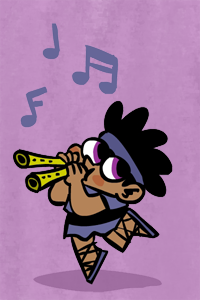 What is Gastrophobia about?
It's the real-life adventures of an exiled Amazon warrior and her son living in Ancient Greece, roughly 3408 years ago. I did a lot of research to make this comic as accurate as possible.
Isn't your comic, in fact, historically inaccurate?
Look, 1400 BCE was a really long time ago. Our historical and archaeological records of that time are dodgy at best and laughable at worst. You'll just have to take my word that this comic is the 100% true portrayal of what really happened.

Anyway, this comic is no less historically accurate than other serious illustrated documentaries like Asterix or Groo.
Wasn't Ancient Greece more recent? Something like 800BCE-600CE?
Gastrophobia takes place during Mythological Ancient Greece, which was a little earlier than Historical Ancient Greece.
Is Gastro Phobia two words?
No. Gastrophobia is one word.
What does "gastrophobia" mean? It's not in my dictionary or on phobialist.com.
Let's say "fear of being eaten."
That's not a real word.
Are you just trying to give me a hard time?
Why was Phobia banished from the Amazons?
She tells Gastro it's because she's afraid of spiders and a true Amazon warrior is afraid of nothing. However, Phobia isn't actually afraid of spiders. What's up with that?
So, Phobia's aim is pretty bad, huh?
She doesn't really like to call attention to that.
So, Gastro's not that good a bard, huh?
What are you talking about, he's great!
Let me get this straight. Klepto is Phobia's slave?
I don't approve of it either, but that's how they rolled in Ancient Greece.
(Actually, he's technically his own slave now.)
If Klepto owns himself, how's he legally a slave?
He's free-ish. Essentially, like Phobia, Gastro, and Krphxyzwlps, he's not considered a full citizen.
What exatly is Mania?
She's a pomeranian. Just like Shun Mitaka's dog in Maison Ikkoku! I know they weren't supposed to exist yet, but time travel's canon, so why not?

She's loosely based off of Carly's & Chris's dog, Commissioner Gordon, who I used to dog-sit.
No, I meant Krphxyzwlps.
She's a centipoidal netherbeast. They're giant, sapient, metalvorous dragon-bug-creatures who live deep underground.
She's also Klepto's ex-lover. ♥ ♥ ♥
How do you pronounce Krphxyzwlps?
Ker-fixy-whelps. The z is silent.
Is Mania/Krphxyzwlps trans?
YES.
Why does everyone have purple eyes?
Only people born in Amazonia have purple eyes.
What's with all the talking animals?
Talking animals are cool.
Does Phobia ever become the best at winning?
Yes.
What do you use to draw this comic?
Book 1: Adobe Flash and a Toshiba Tecra tablet PC.
Books 2-3: Adobe Flash and a Cintiq 12WX on a Mac Mini.
Book 4: Clip Studio Paint and a 16" Cintiq Pro on a MacBook Pro.
Are you trans?
Yup! My pronouns are she/her.
I'm also bisexual! 😉
How may I contact you?
daisyfinchmcguire@gmail.com